Tigers Pushed All The Way By Dons

The match was the Dr Ern Manea Cup, along with the Chris Sheehan game, and it would also be the first time that former Coach Julian Burgess and former players Chris Atthowe and Jace Cormack had returned to land of the Dons after all moving to South Bunbury.

The home team started brilliantly kicking four goals to one to lead by 15 points at quarter time, and still held a one goal advantage at half time.   The Tigers started to get some more cohesive passages of play in the third quarter, and at the final change scores were level.  After a tense opening ten minutes of the last quarter, the Tigers would kick the final three goals to record a hard fought 14 point win.

Kade Wallrodt kicked three for the visitors while Jeff Smith keeps on kicking goals for the Dons, bagging four in a losing team. Thomas Gorter again played well for the Tigers, with Jacob Kendle and Hamish Hutton amongst Donnybrook’s best players.

The Tigers win now sets up a top of the table clash with Bunbury at Payne Park in a weeks time, which should attract a huge crowd, while Donnybrook will host Dunsborough in the Colts, Reserves and Women’s competitions.

First Draw Of The Season

Celebrations turned to silence at Kelly Park on Saturday night, when the Panthers initially thought they had won a one point thriller, but the Goal Umpires amended the full time score at the end of the match, to reflect the SWFL first draw of the year.

At full time the scoreboard read CP 6.14.50 – HBL 7.7.49, but after consultation between the two men who count, the Goal Umpires, the score was amended down to 6.13.49, leaving both teams with that hollow feeling.

The match was an even contest throughout, with no more that two goals separating the two teams from start to finish, with Carey Park leading by three points at quarter time, while the Lions held the same lead at the half time break.

The breeze picked up in the third term and the Panthers would kick three goals to one to lead by two goals at the final change.

Misty rain started to fall in the last quarter, with the Lions kicking two goals courtesy of Jarrod Humphries who was a stand-out at full forward kicking five of his teams seven goals.

In what seemed like a tense final few minutes, Carey Park had chances to win the match and were able to bottle the ball up at half forward when the siren sounded.  The jubilation though was short lived, as the Panthers recorded their 13th League draw in their history, while for HBL it would be their eighth.

Since its inception in 2007, ARSF’s Fatality Free Friday campaign has continued to expand its operation and is now recognised as Australia’s largest national community-based road safety program.

ARSF’s Fatality Free Friday initiative is about much more than just a single day – Friday 27 May 2022. It operates on the belief that if we can go one day without a death on the road, we can demonstrate the impact a focus on road safety can have every day of the year.

Road safety is a global issue that ranks as one of the most pressing matters facing society today. The social, economic, and emotional costs are immense, and these figures are poised to increase unless something is done, now.

All road users are encouraged to get involved and to take personal responsibility to help make a significant reduction in road trauma. We are also aiming for a longer-term community change.

This backs up the SWFL messages of last week with Belt Up Round, courtesy of our Community Partner – TRONOX.

99% of road users believe they are safe drivers yet 70% actually break the road laws, with cyclists the worst at 81%, motorcyclists 77% and drivers 76% of the worst offenders.  1127 people lost their lives on roads in Australia in 2021, 166 in Western Australia, so lets make today, Fatality Free Friday so we can all get to the Footy on the Weekend.

NAIDOC week in fast approaching and the SWFL has obtained a sum of Footballs to be used for promotional purposes with all clubs across the SWFL, highlighting the important role indigenous players make to our game.

NAIDOC Week is an Australian observance lasting from the first Sunday in July until the following Sunday.

The acronym NAIDOC stands for National Aborigines and Islanders Day Observance Committee. It has its roots in the 1938 Day of Mourning, becoming a week-long event in 1975.

The artwork depicts the green ovals played on all over the country with the blue and brown background and dots showing connection to the North and South of WA.  Three large lines with white dots show the roads travelled by many family and community to different towns and country ovals for the love of football.  The small while lines join the communities and football ovals connecting to the main roads and smaller country roads. (Gertina Hayden) 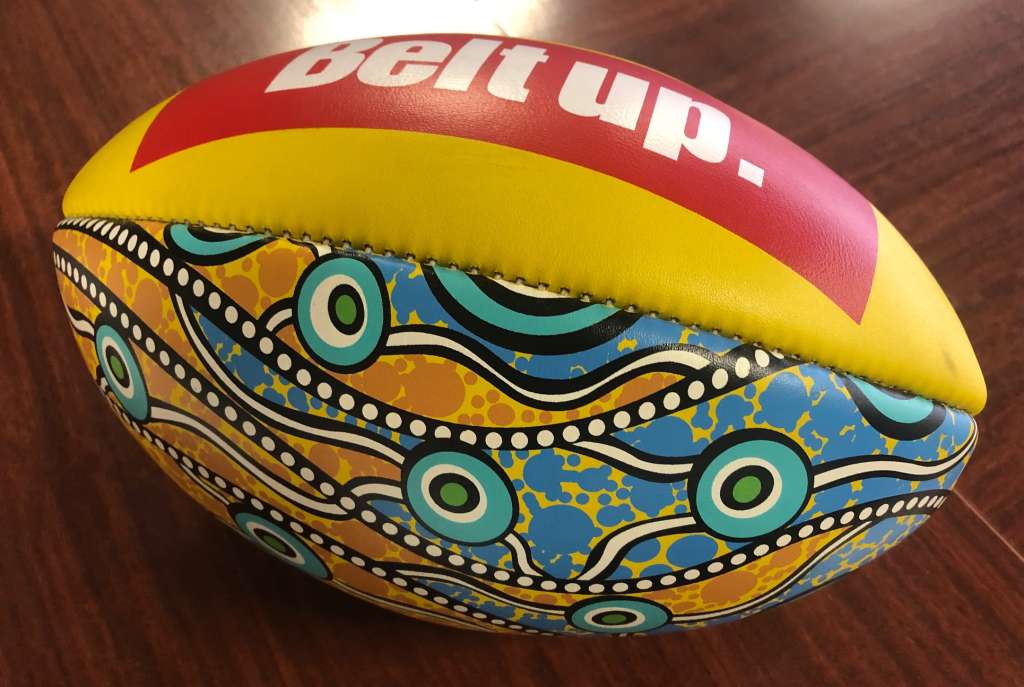 The SWFL would like to advise that some Covid-19 protocols will continue for the foreseeable future, as numbers continue to ravage clubs and the Umpires.

The SWFL would like patrons to remain away from huddles at quarter and three quarter time and out of changerooms, as clubs continue to grapple with cases.

Collie Eagles were hit hardest two weeks ago with 23 cases, while Donnybrook had 18 two weeks prior to that, which puts massive strains on playing numbers.  The Umpire are also currently hard hit, with some officials umpiring three games to keep the competition going.

All clubs and the SWFL would like to thankyou for your understanding as we continue, week by week to play matches, one week at a time.