It was a shoot-out for three quarters of the Harvey Fresh Cup between Harvey Bulls and Harvey Brunswick Leschenault at Harvey Oval on Saturday afternoon, the opening game of round eighteen of the Dale Alcock Homes South West, SWFL Premiership season, witnessed by a healthy crowd.

Fans weren’t to foresee what was about to occur, as there was no score through the first eight minutes of the match, with Jarrod Humphries eventually opening the scoring with a mark and goal from 40m.  That would then open the flood gates, with Michael Bennell winning a one on one contest to snap the Bulls first of the afternoon.  Tyson Powell kicked truly from 45m out to put the Bulls in front at the twelve minute mark, but some undisciplined play led to a triple 50m penalty, with Ty Armitage kicking the easiest goal of his career.  As the first quarter approached time on, Jarrod Humphries converted courtesy of another 50m penalty, and when Blake Offer goaled from a free kick the Lions were two goals in front.  Harley Bennell narrowed the margin after a double 50m penalty to the Bulls, as the 50m count equaled the number of goals.

The second quarter saw an avalanche of goals with the home team kicking eight, while the Lions kicked four.  Michael Bennell scored the Bulls fourth goal of the match in the first 18 seconds of the second quarter, before Kyle Humphries and Brad Holmes also goaled within the first four minutes.  Andrew Haydon was providing plenty of run and carry through the middle of the ground and when Michael Bennell goaled at the seven minute mark, the danger signs were showing for the Lions.  They hit back strongly though with Jonathan Fenwick converting after the eighth 50m penalty of the match, and when Connor Carbone snapped brilliantly the margin was back to seven points.  Andrew Haydon kicked two late majors, including a great running goal just before half time to have the home team 21 points in front at the major break.

It would be goal for goal to start the third quarter, but Harvey Brunswick Leschenault then got a run on with a handy breeze, and when Taj Timewell goaled in time on, the margin was back to four points.

The final term saw the Bulls kick away, with Brad Holmes kicking three goals in twelve minutes to snuff out the resistance.  Holmes ended the day with five goals, passing 50 for the season.    Eli Smith and Andrew Haydon were amongst the best for the Bulls, while Jack Fletcher and Jonathan Fenwick played well for the visitors.

The win keeps the Bulls inside the five, with a big match next Sunday in round nineteen against Augusta Margaret River, while HBL will host Carey Park on Saturday at Brunswick Oval. 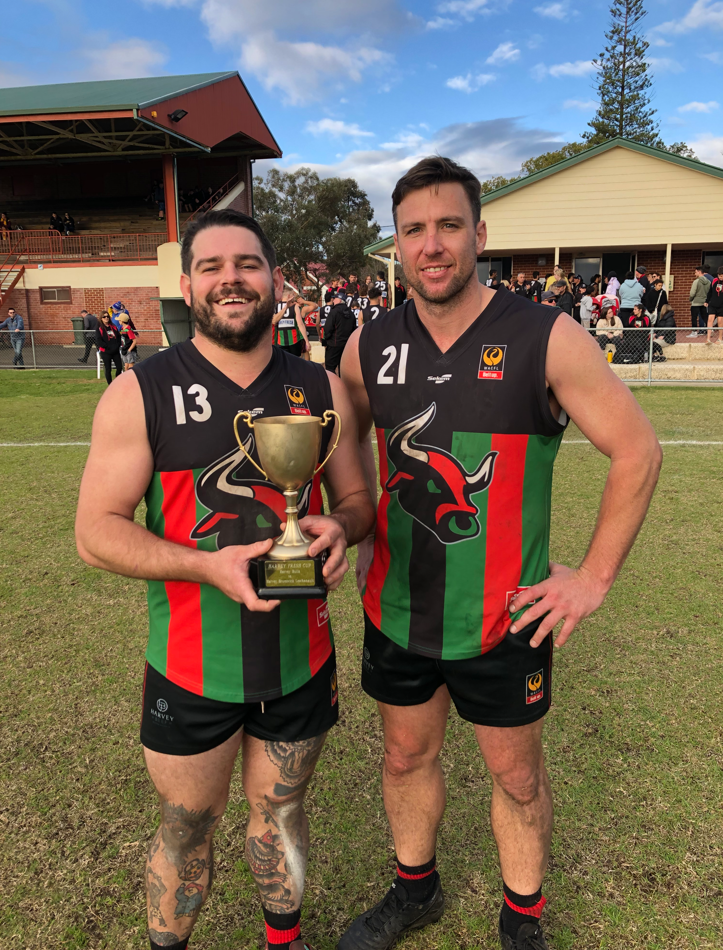