South Bunbury and Busselton will clash in the opening match of Round 13 in the Dale Alcock Homes South West, SWFL Premiership Season, with both teams looking to consolidate their positions within the top five.

With Bunbury suffering a shock loss to Carey Park in Round 12, South Bunbury are now back on top of the ladder, while Busselton sit fourth, a position they have held for several weeks.  In the round two clash, both teams had come off a win, but South Bunbury dominated the fixture, leading throughout, winning by 43 points.

It is expected to be much closer on Saturday, with South Bunbury coming off an easy win against Harvey Brunswick Leschenault in wet and windy conditions, while the Magpies have won their last six matches, with their last defeat in round five at the hands of Carey Park.

Both teams have an attractive game style and can score heavily, with Jordan Strahan kicking four goals in the corresponding match, while for Busselton, Mitch Howlett kicked four goals last weekend against the Hawks and will need to be guarded closely.

Shaun Crane continues to impress and won the Talk to a Match match ball last weekend in a best on ground performance for the Tigers, and he will need to be shut down by the Magpies on Saturday afternoon, otherwise the prolific ball-getter will provide plenty of forward entries for the home team.   Likewise, Mitch Tenardi of Busselton has been obtaining plenty of the ball in recent weeks and will be a danger player for South Bunbury.

With fine weather predicted, it should produce a great game of football.  A win to South Bunbury will keep them on top of the ladder, while a loss could see them lose top spot to Augusta Margaret River if they beat Carey Park.  For Busselton, a win would put them equal with South Bunbury on points, but the Magpies percentage is way inferior to the Tigers currently.  A loss will see Busselton remain fourth, but potentially put them only a game clear of Donnybrook, hence there is a lot to play for on Saturday afternoon. 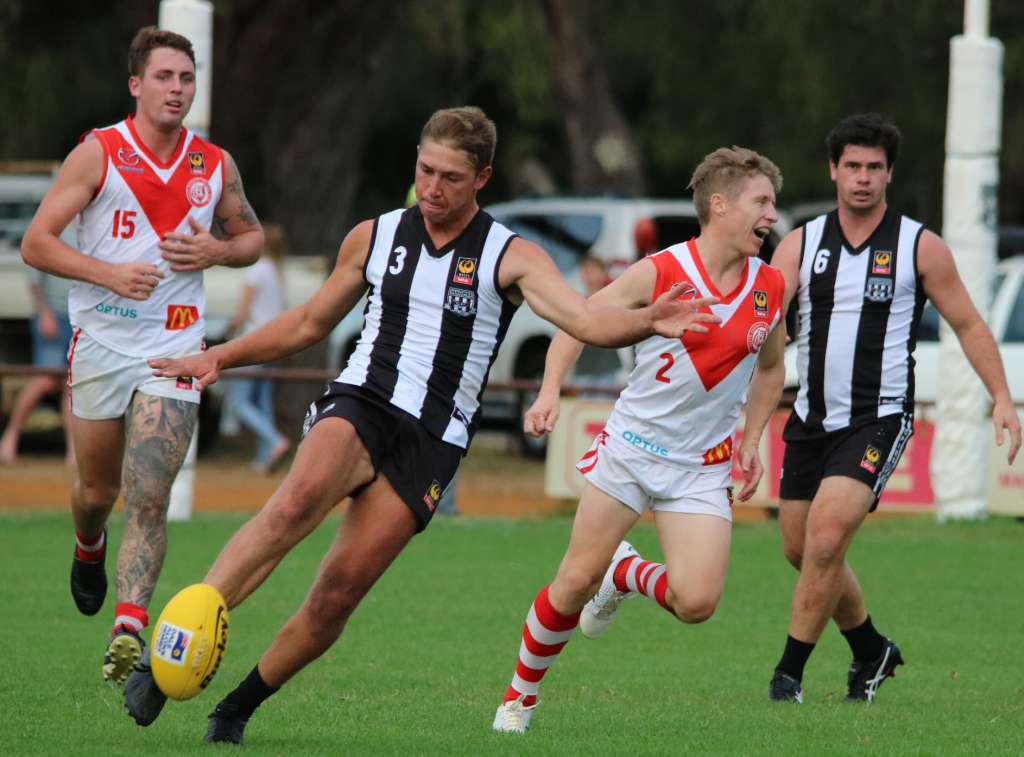 Kevin Chitty and Shaun Crane flank Mitch Tenardi, all of whom will be crucial players on Saturday afternoon at Hands Oval. Photo courtesy of Sharyn Newlands