Longevity and Loyalty are  two words that could describe Laurie Parravacini who was inducted into the SWFL Hall of Fame, last Sunday during the SWFL Grand Final.

Laurie was an administrator spanning five decades, and served remarkably under six SWFL Presidents.   Laurie is still a part of Grand Final 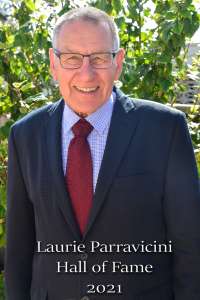 day, assisting with the set up and is always the first in the ground on the day, this year he arrived at 5.00am to ensure preparations ran smoothly before the gates opened at 7.00am.

Hours later at a function at League Headquarters, Laurie was elevated to Hall of Fame status, an honour so richly deserved.