The WACFL is excited to announce the New Holland State Program is ready to go again in season 2022.

After being an Assistant Coach for the inaugural WACFL New Holland State Country Women’s team last year, Gemma Harrison has been appointed the Head Coach of the Women’s team ahead of its clash against the Perth Football League under lights at Fremantle Community Bank Oval on Friday 24th June. The WACFL looks forward to the second instalment of this now annual event as we endeavour to defend our 2021 victory. The WACFL selection panel will be selecting the best players from the Leagues that have nominated teams for the 2022 Nutrien Ag Country Championships which will be held in Perth in September.

We are also excited to announce that our WACFL New Holland State Country Men’s team will recommence their traditional game against South Australia in 2022. This year’s game will return to Adelaide Oval on Saturday 30th July. Kane Benson has been appointed Coach of the team and is looking to make it back-to-back victories against the Croweaters following WA’s success in the most recent fixture at Optus Stadium in 2019.

The last time the side travelled they recorded an agonising 5-point defeat at Adelaide Oval in 2018. The selection panel will be looking to engage players in the lead up to the 2022 Nutrien Ag Country Championships with the focus being on selecting players that represent their respective Leagues as part of Championships to be held in Perth 8-10 July.

The WA Football Volunteer of the Year has become a prestigious award on the WA Football calendar. The Award had humble beginnings in Western Australia and has now been adopted nationally with nearly 1350 nominations state-wide last year.

The importance of volunteers cannot be underestimated. They enrich our society, bring us together as a community, and help keep businesses and organisations afloat.

If you would like to Nominate a Volunteer, click on this link and fill in the details.  Volunteers don’t grow on trees these days so we need to cherish and recognise the ones that we have.

Posted by swfl
This Saturday,  Donnybrook will play South Bunbury at VC Mitchell Park as the first match in round nine of the Dale Alcock Homes South West, SWFL premiership season.
This year the match is important for a number of reasons.
The League teams will be playing for the Ern Manea Cup whilst also being the Chris Sheehan Memorial match.
Dr Ernie Manea was a stalwart of both Donnybrook and South Bunbury. He practiced medicine in Bunbury and as a very young doctor serviced Donnybrook.  He has been a trophy donor to the DFC since 1952!  His family continues to contribute to the Club.  Mark Manea has been a secretary as well as a being our long term time keeper.

Chris Sheehan was a very influential player and Captain of the DFC when he tragically passed in 2015.  The Memorial match has become a yearly fixture at VC Mitchell Park.

This year Donnybrook Football Club will acknowledge both gentlemen during the League Match this Saturday 28 May at 3.00pm.

The Donnybrook Football Club would like everyone to come along to the match this Saturday to support the Dons and remember and reflect on the positive contribution Dr Ern Manea and Chris Sheehan made to the Club. 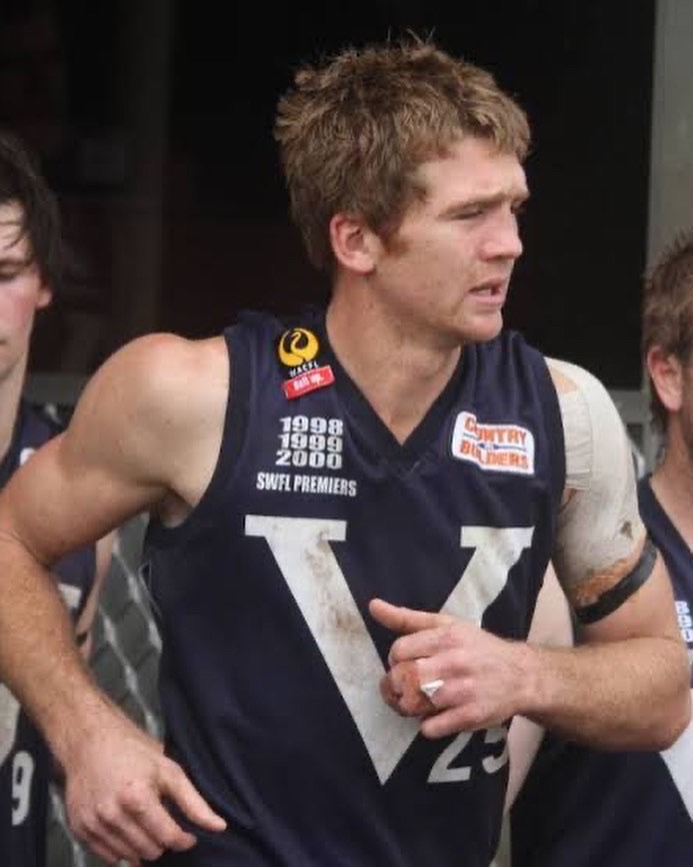 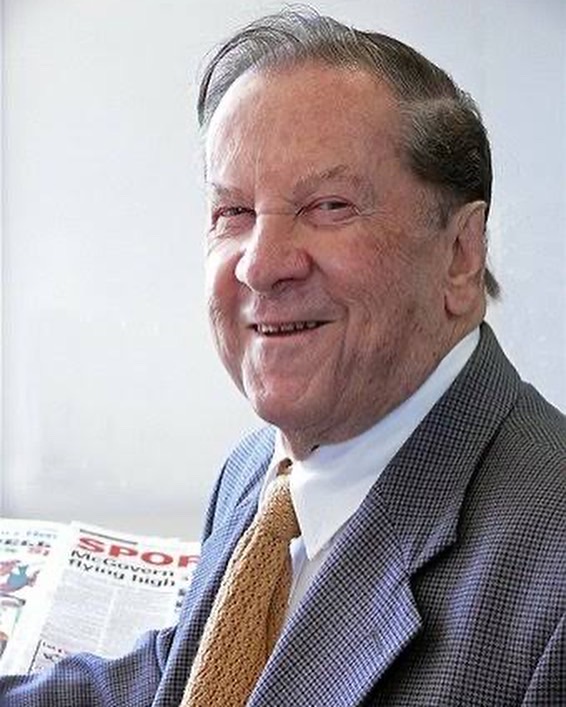 The South West Football League was notified of an alleged racial vilification incident during the League match between South Bunbury and Carey Park on Saturday,14 May 2022.

The South West Football League immediately contacted and consulted with both clubs to initiate mediation however no player could be identified as the alleged perpetrator.

As per the SWFL by laws the matter was immediately referred to tribunal.

Following due tribunal process that included taking evidence from players, umpires, and club officials the identity of the South Bunbury player could not be established.

Whilst the tribunal was unable to identify an individual its findings established that racial vilification did occur.

The South Bunbury Football Club were found guilty and fined and were further instructed to have their playing group repeat the racial vilification seminar.

The SWFL strongly condemns any form racial vilification and remains committed in delivering annual education and in working with all clubs and participants in addressing Racism.

The final match in round eight of the Dale Alcock Homes South West, SWFL season saw Carey Park and Eaton Boomers do battle at Kelly Park before a very healthy crowd, despite horrible weather.

The weather held off just long enough for the Belt Up Pre-Match Presentation before the heavens opened, squashing any thought of a free flowing game of football.

With strong winds and squally rain showers, play was predominantly on the outer side of Kelly Park, with neither team able to put any real cohesive play together.

A brief respite from the weather saw five goals kicked in the second quarter, only eight were kicked for the entire match.  The Boomers held a sizable 13 point lead in the conditions, which became 23 points at three quarter time as the Panthers failed to score.  The home team kicked an early goal in the last to have a glimmer of hope, before the heavens opened again, drenching all and sundry in the process.  The Boomers home by 16 points, in what could only be described as a slog.  Hayden Yarran was the only multiple goal scorer on the day kicking two goals, while Tom Shanahan continues to play excellent football, and was awarded the Belt Up Ball. 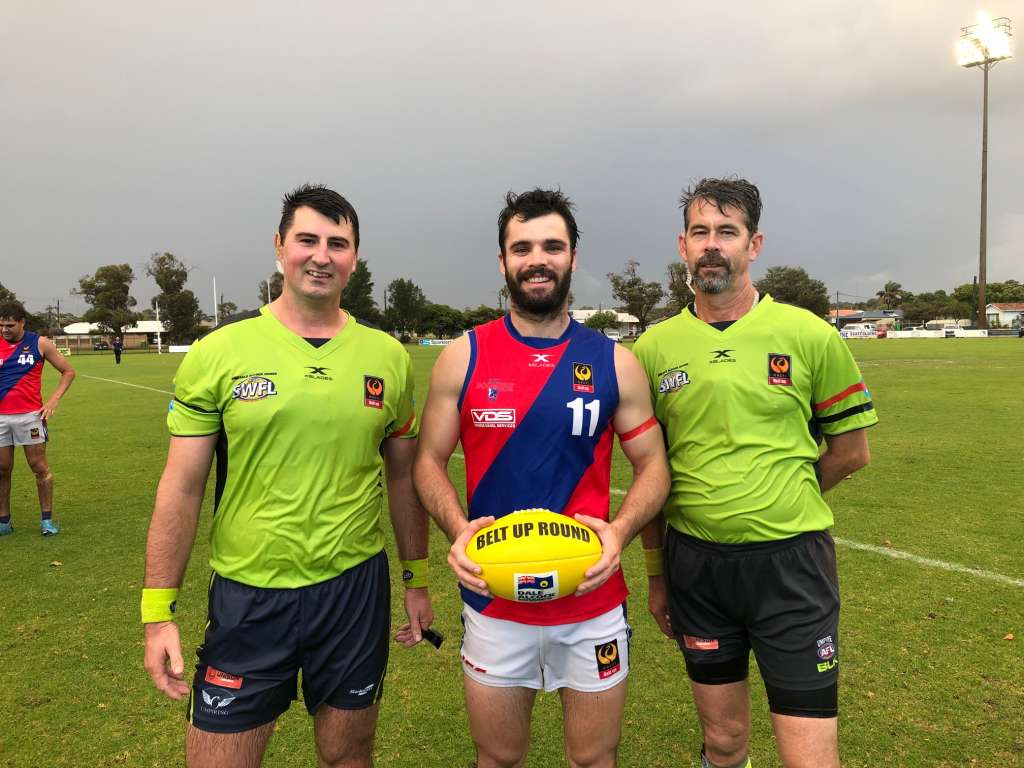 Umpires Braden Surrall and Vance Burton along with Tom Shanahan with the Belt Up Ball presentation.