Round eight of the Dale Alcock Homes South West, South West Football League is the Regional Mens Health Round, which originally was schedule for June, but due to Covid-19 it was re-scheduled to this weekend.

Wheatbelt Men’s Health (Inc.) (WMH) is a not for profit organisation formed to raise awareness of men’s wellbeing and health.

The organisation was formed in May 2002. Our office is based in Northam and we service regional, rural and remote WA.

WMH (Inc.) emphasis is on men’s holistic wellbeing and health, which means the whole person and understanding problems/issues in the context of life. When we consider the individual we believe we are more than just physical and mental beings, the often neglected element, is our “social/spiritual” wellbeing.

We promote the requirement that it is important to know and understand the story behind our identity and what it is that makes us an individual.

We engage with men on their terms and go to where the blokes are.

Since July 2010 WMH has been delivering “The Regional Men’s Health Initiative”.

The Regional Men’s Health Initiative is a team of people who are passionate about raising awareness of men’s health and wellbeing in regional, rural and remote communities throughout WA.

We’re not “a health organisation” – rather, we act as a bridge of support and education to regional men, communities and health services.

We encourage men to talk about issues in their lives and identify their true mates and the people they can confide in when times get tough.

As blokes we only have three main categories of people we can talk to. These categories are; a partner, a peer and a mentor.

It’s important to identify that all of these categories may not be available to us at different times in our life, so take the time to stay in touch and talk to a mate.

The slogan “...before it all gets too much…Talk to a Mate!!®” is the basis of all our initiatives. 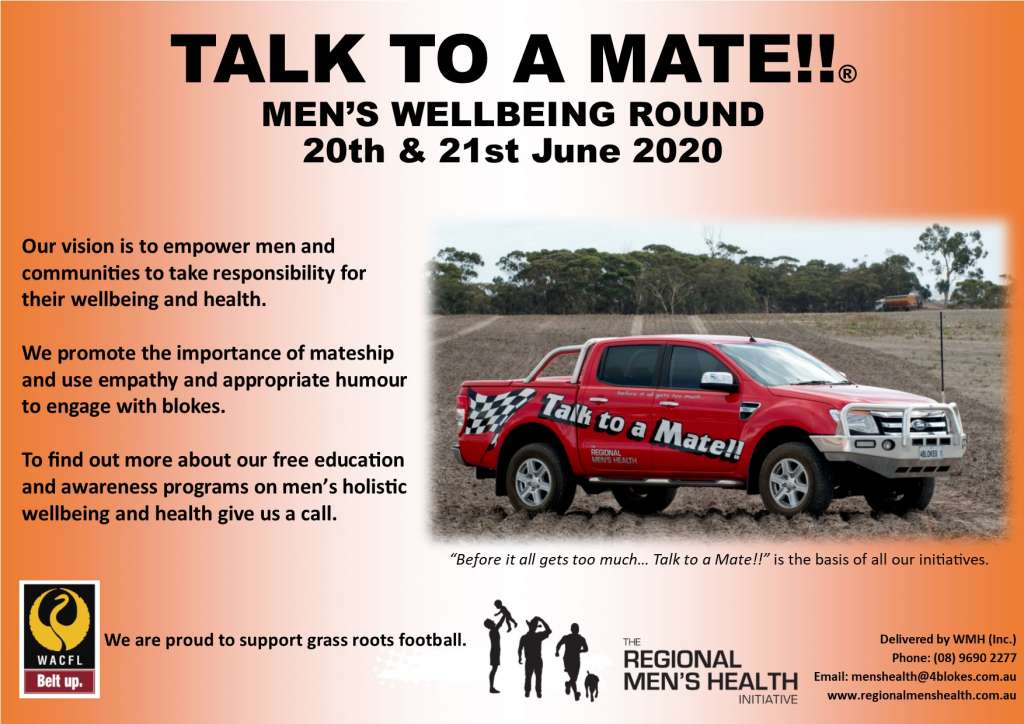