Can Bulls Take Down Hawks In Harvey

In a mouth-watering clash at Harvey Oval on Sunday, Harvey Bulls will take on second placed Augusta Margaret River in promises to be a great match.

Harvey Bulls are coming off consecutive wins against Donnybrook and Harvey Brunswick, will face Augusta Margaret River who will be fresh off the bye, something that has helped some teams and hindered others.

In recent weeks Harvey have shown a real potency up forward with Brad Holmes and Michael Bennell kicking 24 goals between them in the past three weeks and when you add in Tyson Powell who has kicked six in the last two weeks, the Bulls have some significant fire power for the Hawks to have to contend with.  Apart from kicking the goals, it has been the way Harvey have kicked them, with the ability to kick multiple goals in quick succession, which has put immense pressure on the back lines of opposition teams.

Not to be outdone, the Hawks have the second highest amount of points kicked, and second least amount kicked against, highlighting their many avenues to goal, and stingy defence.   Tim Noakes is the Hawks highest goal scorer with 28 opposed to Holmes 53, but the Hawks have many players including Harry Taylor, Mitch Gerrans and Matthew Bannister who can all kick multiple goals in a game.

If the Hawks get the win, they will keep their chance alive of taking top spot at the end of the Home and Away season, while if Harvey Bulls win, they will potentially stay ahead of Donnybrook who play South Bunbury on Saturday evening.

Although not quite an Elimination Final for the Bulls, it is a game they would desperately love to win and would go a long way towards booking a finals berth. 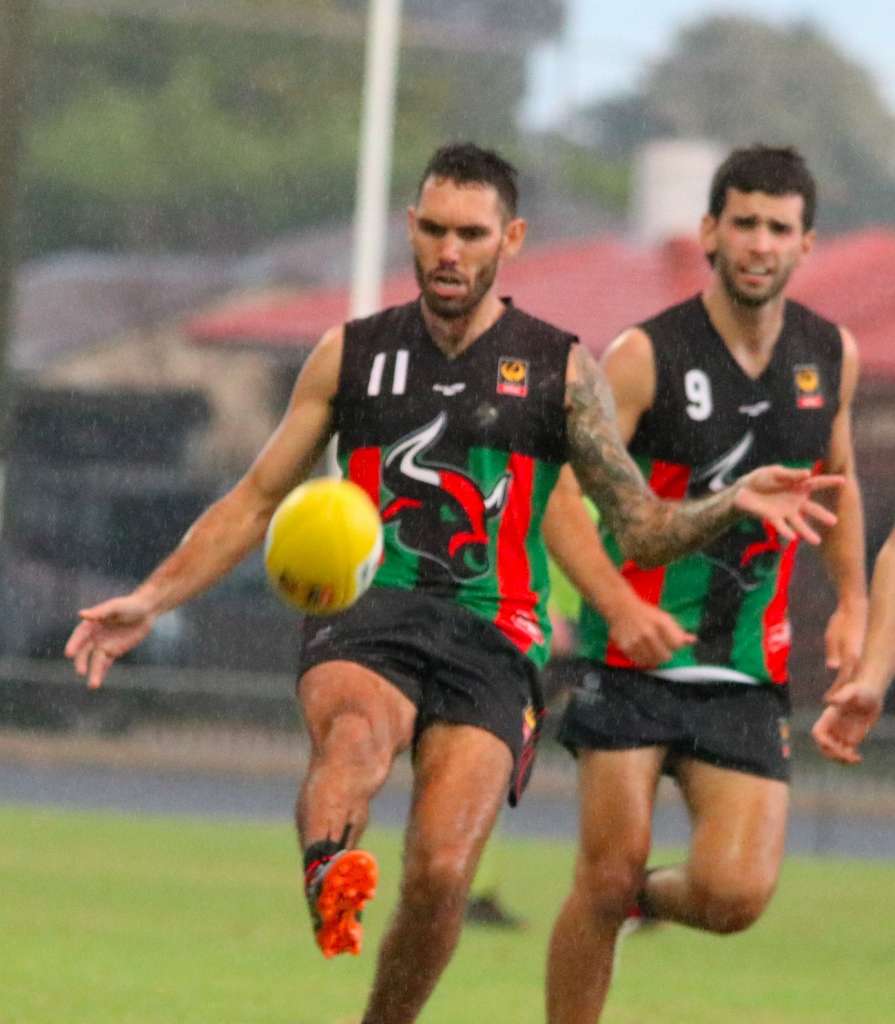 Harley Bennell has been playing excellent Football for the Bulls and will be a crucial part of the Bulls line-up on Sunday. Photo courtesy of Sharyn Newlands

In a crucial clash at Hands Oval on Saturday evening, South Bunbury will host Donnybrook in what promises to be a great game, with both teams desperate for the four points.

A win to South Bunbury will keep them on top of the ladder, while Donnybrook currently sit sixth on the ladder, just 0.73% behind Harvey Bulls who play Augusta Margaret River on Sunday.   A win by the Dons could put them into fifth even if the Bulls win depending on the margins.

In the encounter earlier in the year, Donnybrook started well leading by 13 points at quarter time, 6 points at half time, and scores were locked at 9.5.59 a piece at the final change.  The Tigers would go on to win by fourteen points with Tom Gorter and Jay Crossman amongst the Tigers best.

Since that time, the Tigers have gone on to win six of their last seven games, while Donnybrook have stumbled and two weeks ago fell out of the five at the expense of the Harvey Bulls, who downed the Dons by 40 points, but in a massive form reversal, last weekend Donnybrook accounted for Busselton to the tune of 43 points.  The Dons will be looking to continue that form on Saturday under the bright lights at Hands Oval, and can go along way to booking a finals berth if they can.  Sean Lynch, Ben Howlett and Jacob Kendle all had plenty of possessions and will need to be watched carefully by the Tigers.

The Tigers also have plenty of players in good form including Captain Kevin Chitty, Bodhi and Ethan Nordahl and Jordan Strahan who has kicked 53 goals for the season, and will be just some of the players Donnybrook will need to shut down to record a victory.   The Dons will have added incentive with veteran Shane Cristaldi playing his 250th game. 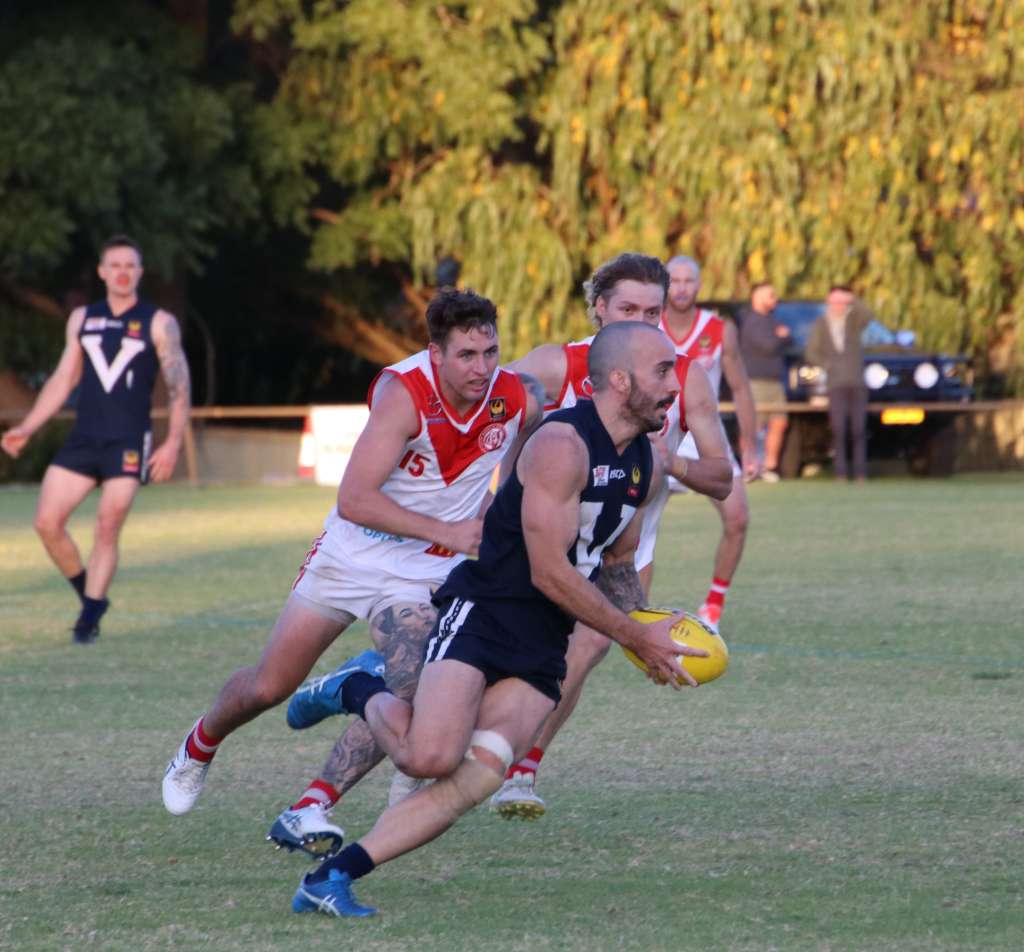 Jake Anderson being chased down by Kevin Chitty earlier this season in the Round 9 clash at VC Mitchell Park. Photo courtesy of Wayne Hislop.

Pride On The Line At Brunswick

Harvey Brunswick Leschenault and Carey Park will do battle in the opening game of round nineteen this Saturday, of the Dale Alcock Homes South West, SWFL Premiership Season, with pride very much on the line between the two teams.

The Panthers eighth and Lions ninth, both have 14 points and are separated by just two percent, and their previous meeting earlier this year at Kelly Park ended in a thrilling draw.

Carey Park have scored the least amount of points of all teams in the League competition this season, while the Lions have conceded more points than any other team, making this an intriguing match up.

Last Saturday the Lions were involved in a shoot-out with Harvey Bulls, scoring 13 goals, with Jarrod Humphries kicking four majors, while on Saturday evening, the weather turned and became wet, with the Panthers only able to manage two goals against South Bunbury.

Jack Fletcher and Jonathan Fenwick got many possessions last Saturday and will be looking to continue that form on their home ground, while Jack Monkhouse, Bill Brown and Bailey Taylor continue to play well for the Panthers.

With little separating the two teams across a number of facets, this has all the hall marks of another close encounter. 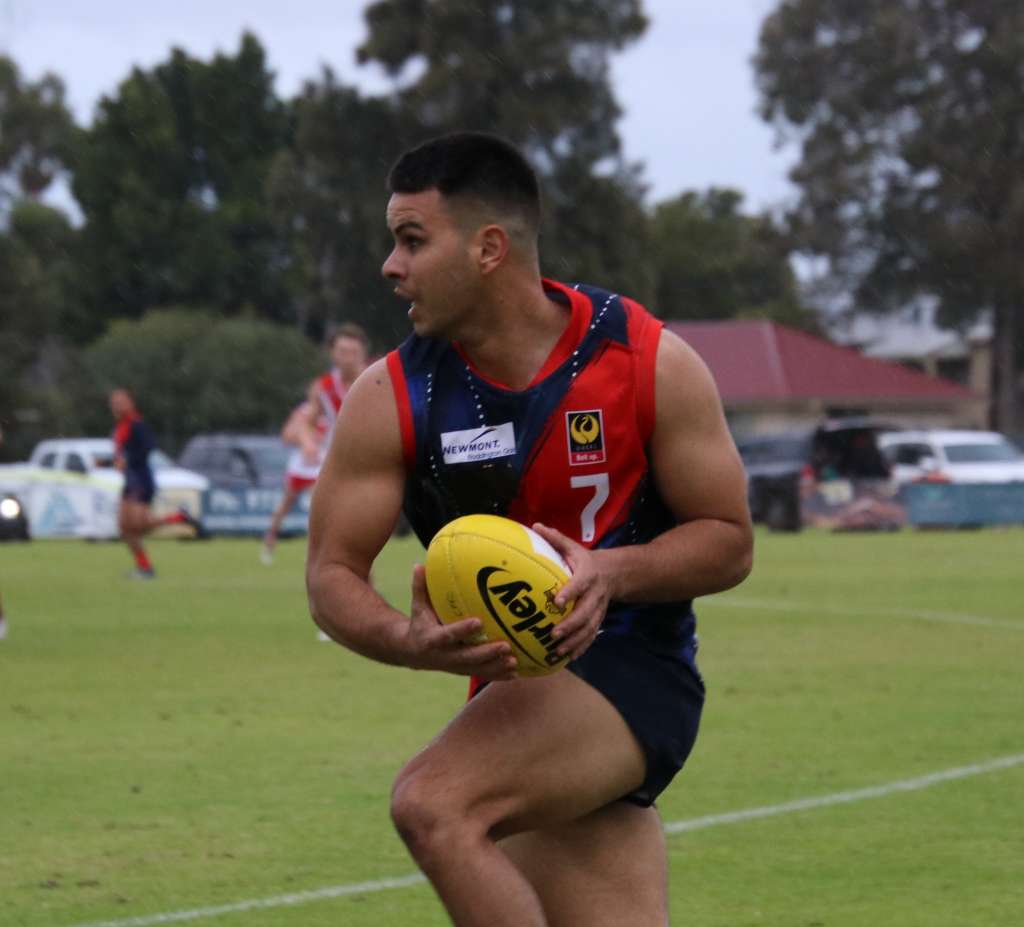 Jye Graham has been playing well in the Panthers backline this season. Photo courtesy of Wayne Hislop.

No Winners In Thrilling Draw!

Eaton Boomers and Collie Eagles have fought out a thrilling draw at Glen Huon Reserve on Sunday afternoon, where both teams will be wondering what might have been.

With the Boomers desperately needing to win to keep their finals hopes alive, they came from 29 points down in the second quarter to twice take the lead in the final term.  The Eagles on the other hand, squandered an opportunity to win, giving up that lead they had built early in the match with some excellent football.

The Eagles led for most of the match, leading by 11 points at quarter time, 27 points at half time and still by 20 points at three quarter time.  With the their season on the line, the Boomers stormed home, taking the lead late in the match, only to give it back again a minute later.

In a stirring last couple of minutes both teams had an opportunity to win, but were not able to kick the winning goal.

At full time the Scoreboard showed 76 – 75 in favour of the Boomers, but most at the ground were aware that wasn’t correct and the goal umpires quickly amended it for the second League draw of the season, which now sees the bottom four teams on the ladder all with a draw.

The draw does nothing for Eaton Boomers chance of making the finals, and they now sit six points behind Donnybrook.  As predicted Collie will certainly cause plenty of trouble for other teams chances in the run home, having now lost (or not won) 50% of their matches by 20 points or less.  To have any chance of qualify for the finals, Eaton will have to beat Bunbury next Sunday, while Collie’s League team have the bye, while their Colts and Reserves play Dunsborough. 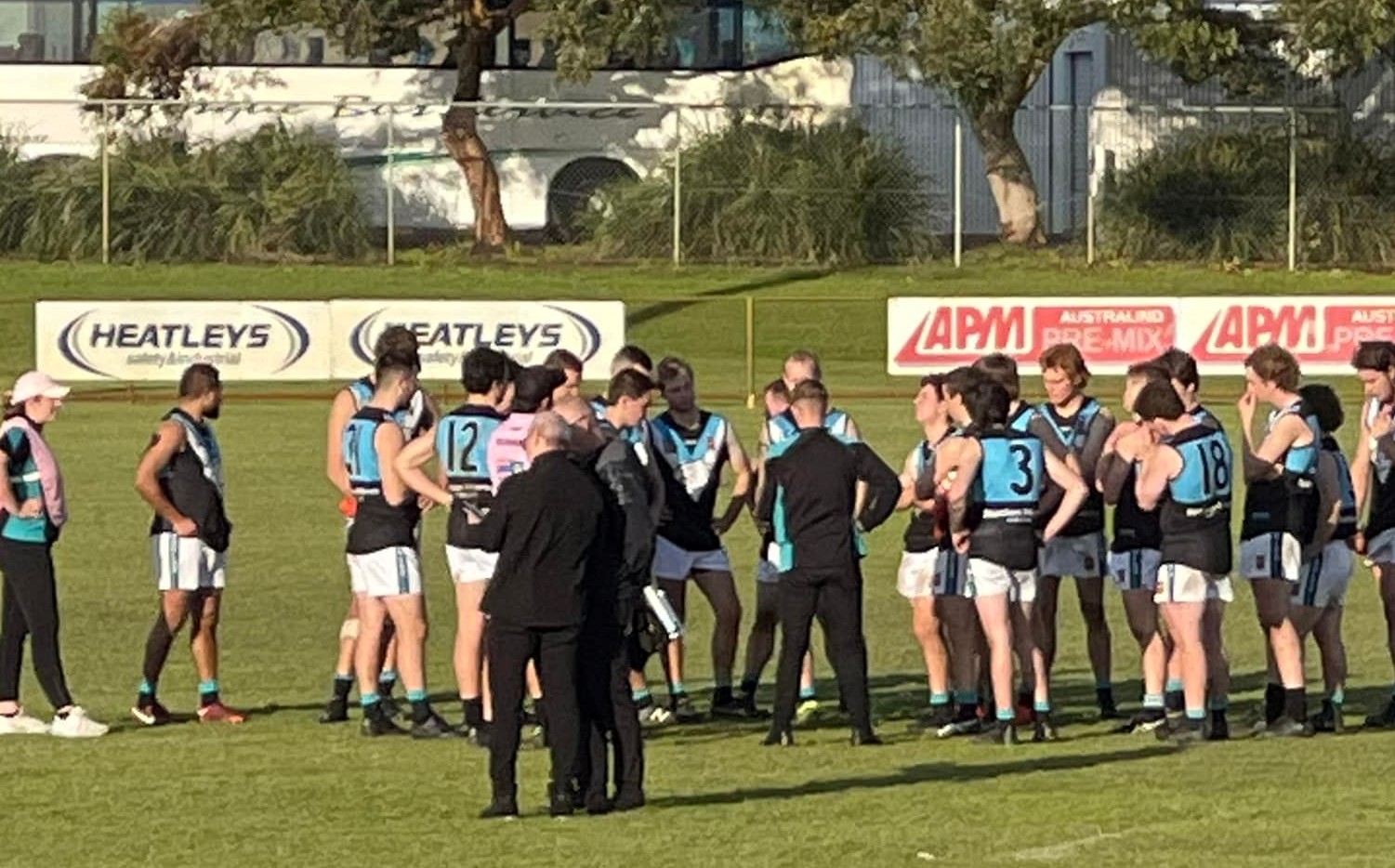 Donnybrooks season took a nose dive a week ago when they were beaten at VC Mitchell Park by Harvey Bulls, and with a tough run home, finals were getting out of reach.  A week though is a long time in Football, and the Dons, in front of their biggest home crowd of the season, stunned Busselton with a 43 point win on Sunday afternoon.

The victory was set up in the first quarter, kicking two very quick goals to start the match, with Busselton practically without a possession.  When Sean Lynch kicked the fourth goal within fifteen minutes, alarm bells were ringing for the Magpies who had only scored a behind. The home team lead by 33 points at the first change, ultimately too much to peg back for Busselton.

Blake Cann kicked Busseltons first goal from 40m out early in the second quarter, but that was quickly answered by Adrian Hodgetts with a good running goal.  Busselton stopped the Dons forward flow and seemed to be getting on terms with the opposition, and when Blake Cann tackled well in the forward line, he converted his second and reduced the margin to 26 points.

The Magpies didn’t score in the third term, and with Donnybrook kicking three goals, the game was out of reach with a quarter to play.  Jaice Pardi kicked Busseltons only goal of the second half late in the match, as the Dons recorded a healthy win, assisting also with their percentage.

Sean Lynch and Ben Howlett again played well, while Jeff Smith booted four goals.  Damian Lee and Jackson Arbon were amongst the best for Busselton, who have let a golden opportunity slip to potentially move into third place on the ladder come finals time.

The Dons will next play South Bunbury next Saturday evening, while Busselton will have the Club bye, before returning in round twenty against Collie Eagles. 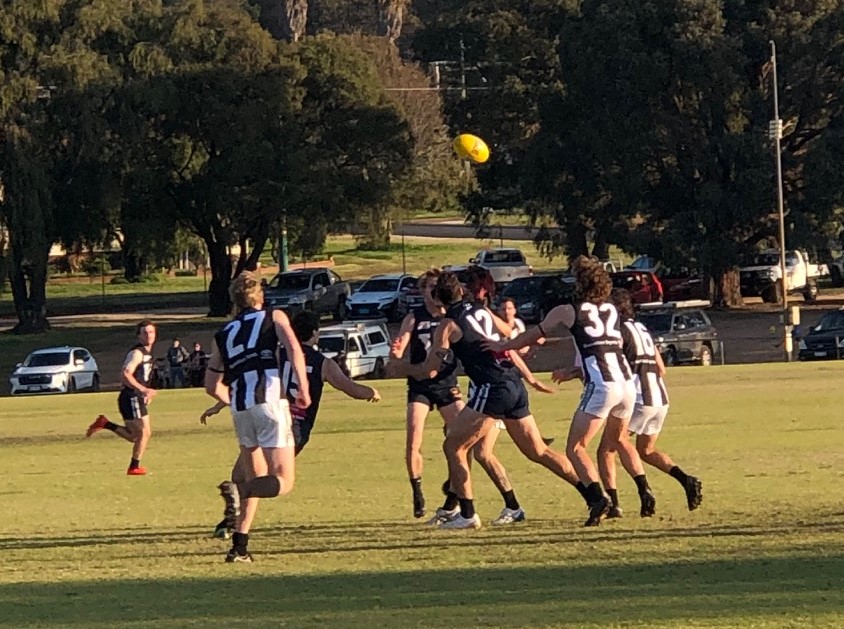 Jeff Smith amongst a nest of Magpies, kicked four goals.