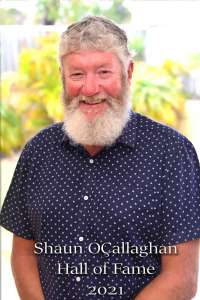 member, then Shaun O’Callaghan would be certainly on the list.

If service to your Club and football then he would be a very strong candidate for the honour.  Carey Park Football and Sporting Club were proud to nominate Shaun O’Callaghan to join the ranks of the SWFL Hall of Fame, an honour bestowed on him, last Sunday during the SWFL Grand Final.

Shaun is well known throughout as the SWFL games record holder. He played 370 League games for Carey Park.

His remarkable games record was with one Club and illustrates his football loyalty over many seasons.  Shaun came to Carey Park from the Marist Juniors to play Colts.  It wasn’t long before the League coach, Errol Barrett saw the potential Shaun showed.  At the tender age of sixteen, he made his League debut for the Panthers after that day first having already played a Colts game.

That day was followed by an illustrious career that earned plaudits from all in the South West football community.  He was to go on to play a further 369 games and indoing so setting a SWFL record number of League games played.  His record number of games were played with an impeccable record that saw him never suspended thus, demonstrating his great sense of fair play.

Shaun’s playing record saw him win the Harris Medal (Club Fairest and Best ) in 1983, 1984, 1985, 1989 and 1993. He turned to coaching and coached the Carey Park league team in 1991, 1992 and 1993.  In addition, he captained the League team on numerous occasions.  During his long career he represented the SWFL many times where he played with distinction.  In 1999 he played an active part in the SWFL’s Governor’s Cup campaign in the WAFL pre-Season competition.  In this competition he worked closely alongside coach Darrel Panizza.

The term an ornament to the game fits comfortably with Shaun O’Callaghan making him an ideal candidate for the SWFL Hall of Fame, an honour now he so richly deserves.