Last Sunday during the 2021 SWFL Grand Final, a presentation was made to Graham Jeffery who was inducted into the SWFL, Hall 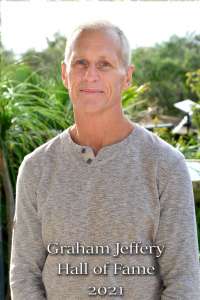 Although only small in stature Graham was a fierce competitor for HBL, who loved shooting out bullet like hand passes from the bottom of packs.  Not an overly long kick, it was his trademark hand passes that were the hallmark of his game, particularly later on in his career.  It mattered not what size his opponents were, his never say die, and unselfish attitude ensured he gave each contest the utmost effort for the benefit of the team.  Heaping praise on Graham didn’t sit all that comfortably with him and he somewhat shunned the limelight in favour of team success.

Graham only had one season as HBL league coach, in 2007, the season they went through undefeated to win the premiership.  As usual, Graham tried to keep it low key as far as his input was concerned, and instead stood back to let his players bask in the glory of something truly special.  Such is the guy.

Seven club Fairest & Best medals, two Hayward Medals and a host of other awards are testament to the skill and demeanor of this player.