The Landmark Country Championships will be played in Perth and the Metropolitan area from Friday 7-9 July 2017, with one Regional fixture to be played prior to this on 17 June 2017.  SWFL this year will play the Peel Football League at Rushton Park, Mandurah.

The Peel Cavaliers have defended their title at the Landmark Country Football Championship, after defeating the South West on Sunday at Medibank Stadium.

The second quarter saw much of the same, with almost all of the play revolving through the midfield, with both teams working well in defence, repelling attacks.  Courtney Lakay, who would go on to be the best player on the ground, kicked the Cavaliers second goal, and the scoreboard was starting to look bleak for the South West.   The only goal of the first half came courtesy of Patrick Farrant.

The lead extended in excess of four goals when Peel kicked their fifth and sixth goals of the match, before Aidan Clarke and Brett Peake goaled in the latter stages of the final quarter, in one of the lowest scoring grand finals in Landmarks long history.

The South West Football League Colts team, have won their 14th Landmark Country Championship at Bendigo Bank Arena, Mandurah today, with Sebastian Dixon kicking a goal after the siren to win the match for the South West.

In a great game of football, scores were close throughout, with the young Cavaliers leading by five points at quarter time, before scores were level at the main break.  The South West led by six points at the final break before Peel took control.

With 30 seconds remaining the margin was seven points in favour of Peel, but a goal made the margin one point.  A quick clearance out of the centre saw the ball end up with Dixon, who went back to take his kick when the siren sounded.

Although it didn’t go straight through the middle, it was good enough for the South West to clinch victory from the jaws of defeat.  It is not the first time this has happened in a Landmark Colts Grand Final, with the South West being on the wrong end of the same scenario in 2011 when Kimberley Spirit took victory after the siren.

Five players plus coach David Lewis have been selected in the CBH All Star Team.

The South West Colts Team which will represent the SWFL this week at the Landmark Country Football Championships, will hold a function tonight after their final training run, where the final 27 players will be presented with their SWFL polo shirts and jackets.

The team will play two games in the round robin format on Thursday at 1.00pm against Regional Districts and 3.00pm against Northern Suns, while on Friday they will play Peel Football League at Midday, and their final match against Great Southern at 2.00pm.  All games will be played at Bendigo Bank Stadium, Mandurah (Rushton Park).

Results of the games will be posted on Facebook throughout the Carnival with a comprehensive review on the SWFL Website on Monday.

This weekend, the 53rd Landmark Country Football Championships will be held, with the South West Football League looking to win the Title for a twenty third time.After the Landmark Regional Game three weeks ago, the South West will need to win both games on Saturday to have any chance of making the Grand Final on Sunday.

South West will play Great Northern in their first match at midday at Fremantle Oval, with the Great Northern big winners against Avon by 102 points in the Regional Round, and are full of confidence coming into the weekend.

The other crucial fixture after the Regional Round results will be the match between UGSFL and GNFL, which will be played directly before the final match in the round robin which will see Avon FA play SWFL (3.30pm)  The South West team will know the scenario going into the match what they need to do, pending if they defeat Great Northern.Based on the Regional Round results there could be the chance the results could pan out like last season, where the end result of the finalists was not known until the final match was completed.  For the SWFL to make the final, the SWFL will need to defeat both GNFL and Avon FA to have any chance.

If Upper Great Southern defeat Peel Football League and Great Northern defeat Upper Great Southern percentage will be the deciding factor on who plays in the Grand Final, with Peel most likely to defeat LSWFL, which could see the possibility of four teams finishing on two wins after the Round Robin competition.   That is a lot of ifs, buts and maybe’s, and is solely reliant on the SWFL winning both matches.

The South West Football League have released a 28 man squad, with 25 players to make the trip to Perth, with an injury cloud hanging over a few players after the weekends fixtures.Results will be posted on Facebook on Saturday.

It certainly was an interesting scoreline in the Landmark Regional Round match between Peel Football League and the South West Football League on Saturday at Rushton Park, Mandurah.

If you weren’t at the game, and saw the quarter time score which had the hosts 32 points in front at the first break, you could assume a strong breeze was blowing.  The half time score indicated a different story as the lead extended to 59 points at the major break, with the SWFL recording their lowest ever half time score in a Landmark fixture of just two behinds, and a margin which would break all records to come back from should a victory be achieved.

After half time, it would be the polar opposite of the first half as the SWFL finally scoring their first goal.  The SWFL team kicked five goals to one in the third quarter, including two goals to Brett Peake who finished the match with three, while Jace Cormack would get plenty of the ball to give the SWFL some much needed drive into the forward line.  Down back, Will Oelsnik and Travis Justins would be resolute, keeping the home team to just one goal.

The final stanza would see the SWFL kick a further five goals, holding Peel to three behinds, to reduce a 59 point half time deficit down to nine points at the final siren. 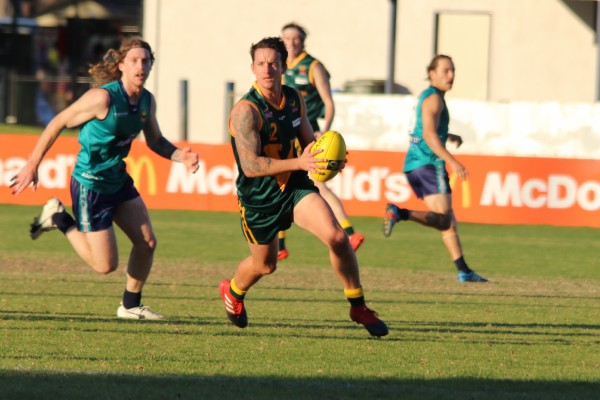 Jace Cormack was one of the SWFL best players on Saturday. Photo courtesy of Wayne Hislop photography.

Seven matches will take place in regional WA this Saturday as part of the Landmark Country Championships revised format which is in its second year. This number is up from six matches last year.

2017 sees the return of the Goldfields Football League who should field a strong side in their return to the Championships since dropping out of the program in 2012.

WACFL General Manager Joe Georgiades was excited by the potential of the regional matches “2017 will be the second year of the Regional trial and we are hoping the excellent fixtures sees some exciting matches and big crowds over the weekend.

Players should all be well aware of the fixturing and if the current state squad is anything to go by, there should be some excellent players putting their hands up for rep footy in 2017.”

All competitions south of Carnarvon will break for the weekend with a number of Leagues also fielding sides at the Great Southern (Kulin) and Northern Regions (Wongan Hills) Colts Carnivals which has matches over Saturday and Sunday.

Following this, all matches head to the metropolitan area with five Colts to fight it out in Mandurah between the 6-8 July with Peel, Northern Regions and the South West taking out the last three Colts titles.

Seniors will play two shortened matches on Saturday 8 July in Perth, with finals to take place on Sunday. The South West proved it was possible to still make the finals despite losing their Regional Match to Peel last year. Peel was a dominant force in 2016, but interestingly, a number of their better players are now playing in the South West.

In a first, the WACFL also has plans afoot to host a female ‘Talent ID’ match for some of the best regional female players on Sunday 9 July. The match could prove a great stepping stone for females playing in the country to get on an AFLW team list.

Details of Perth matches will be released at a later date.

The SWFL, initial League Squad has been announced for 2017, with players from every team a part of the squad, which is a sizable one, which will be trimmed prior to the first match, to be played on Saturday, 17 June 2017 at Rushton Park, Mandurah. The remaining fixtures will be played in Perth as part of a round-robin format on Saturday, 8 July 2017.

The 70 players ear-marked to be part of the final 27 man squad was chosen prior to the round six fixtures, which did have a few notable injuries.

The SWFL Colts Landmark Squad has been released with players from all ten team represented in the initial 53 player squad.

The Landmark Carnival will be played on Thursday, 6 July 2017 and Friday, 7 July 2017, with the Grand Final to be played on Saturday 8 July 2017 , with all games scheduled for Rushton Park, Mandurah.