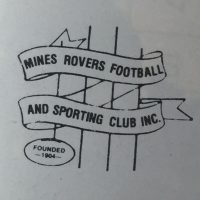 Mines Rovers were founded in 1904 and were an inaugural club in the SWFL from 1957.  In early 2001 a steering committee was formed as both Mines Rovers and co-tennants, Collie Saints were struggling for player numbers, with the ambition of an amalgamation between the two Collie teams. After much heart-ache on both sides, the teams both ceased competition at the end of the 2001 season, forming as the Collie Eagles from the start of the 2002 season.